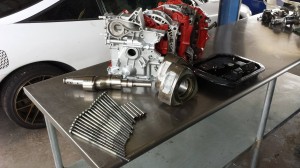 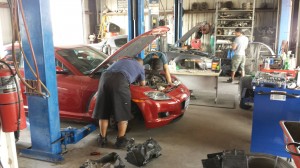 PLEASE NOTE! ON ANY INSTALLATION OF A NEW OR REBUILT ENGINE ALL OF THE FOLLOWING SHOULD BE CONSIDERED TO CHANGE NEW ORIGINAL MAZDA EQUIPMENT AND WILL AFFECT WARRANTY IF ONE OF THESE WAS THE CAUSE OF FAILURE! OIL INJECTORS/OIL INJECTOR LINES/OMP CHECK OR CHANGE/OIL COOLERS/FUEL INJECTORS/WIRING/SPARK PLUGS, WIRES, AND IG COILS/FUEL PRESSURE REGULATORS OR CONTROL SOLENOIDS/ENGINE GASKET KIT/ALL FILTERS/ CATALYTIC CONVERTER/WATER PUMP/RADIATOR/FANS

This is a write up done by Kurt Robertson MAZDA, and is a perfect explanation for all Rotary installations!

The Mazda Rotary Engine is a very durable design if set up properly. Unfortunately if attention to detail is not done upon startup a perfectly serviceable engine (used) or a very valuable investment (rebuilt) engine can be damaged or even destroyed upon startup.

The engines built today seldom are installed by professionals and dealers, independents and enthusiasts all pose a risk of compromising the rotary within minutes, hours, days or weeks after startup if they are not aware of some very basic practices

The first rule in the install will be “you’re engine is only as good as its’ weakest point” or accessory. The second rule in your install will be, “think and plan ahead”. The third rule will be patience in troubleshooting and break in.

#1.WEAK POINTS  Even a used engine installation is quite an investment requiring a new water pump, radiator, radiator and heater hoses, belts, spark plugs, wire set and fuel filter and depending on configuration it may require fuel injectors and grommets, clutch assembly, turbo , coils and/or distributor cap and rotor.

And what about engine life? usually the difference between a engine that goes 60K miles and 100K can often be linked to a lack of investment into a new radiator or accessories.

Let’s not forget to talk about the most neglected part left in a chassis, the oil cooler. What makes us think that we can have a catastrophic internally lubricated part fail in our last engine, with the old failed engine putting metallic material into the entire system and leave the oil cooler full of the previous engines failed particulates. You wouldn’t put sand in your oil filter for your new engine, but the oil cooler . . . . . . . it’ll be alright!

Your install is only as good as its’ weakest point!

A-IDLE : Set a high idle , RX8s have no Idle adjustments, so keep your idle up by using the accelerator. Do not let drop below 1200 rpm during the first 100 miles. This will help facilitate a smooth seating of all the seals in opposed to a labored 800-900 rpm which foster and develop detrimental internal wear patterns.

B- TIMING: We recommend that you initially set the car between the factory trailing and leading specs or slightly retarded to enable better start up as well as to eliminate any possibility of detonation. Again RX8s change their own timing settings. Once broke in, setting your timing for optimal performance will be setting trailing at the leading spec and the leading advanced 8-10 degrees

C –HARD START: Drive, often the hard start will disappear as the hard parts seat into the housings. During your break in it is not uncommon for the high idle to increase and change as much as 1-200 rpm per 50 miles a couple times, bring tools to lower idle as necessary , but still keep a high idle at 1200-1500 rpm

E- HIGH OIL CONSUMPTION- It is common for all rotary engines to occasionally go thru periods where they use over a quart of oil in 500 miles, be aware of this and that this is not a normal ongoing condition

F-DIED AND WONT RESTART HOT – Rotary engines are Lipophilic (oil loving). Induce a ½ pint of heavy motor oil 30W or ATF into both the front and rear chambers. This will raise compression and often results in a restart. In the 1969-85 cars put the oil directly down each primary. The 1986-1991 cars have two nipples placed directly into the primary plenum for this from the factory, The 2004-2012 cars also have two nipples in the primary runners on the passenger side. These ports have  rubber plugs on them.

G- COMPRESSION- A compression test can be done after initial startup but will produce low numbers unless 100-200 miles have been put on the engine. A engine that has not been fired will often produce very disappointing numbers due to wash down, startup procedures, unseated seals and cranking speed.

H- 500 MILE SERVICE- This may be done any time before 1000 miles. Drain the oil into a clean wide and shallow drain pan and inspect. The darkened oil should possess a slight gold shimmer. Small and large flakes and or chunks are not normal and are indications of an impending failure. Gold shimmer, red rag material, silicone, gasket material and light sludge are what are normal and need to be removed by discarding this break in oil and refilling it with 10/40W  between 500-1000miles

I-CONSISTENCY- Whether it is a good run during the first 500 miles, or an attention to clearing codes and wiping RAM (random access memory) be consistent. The norm in rotary engines is to throw the baby out with the bath water. A techie will often condemn a block and a motor head will often blame the computer, fuel or ignition system. It can often be both or neither, but cannot be concluded until a good basic startup and break in has been performed.

J- ELECTRONICS- “Mazda States in their FWM” – This is not a perfect product and neither is an EFI system. In a controlled laboratory setting a technician will often have the task of performing something multiple times. Residual voltages, induced milliamps, spikes and such, will very often create fault codes. Clear the DTCs (diagnostic trouble code) start the car and read pending codes (real root problems). Do it again, 2 out of 3, 3 out of 5 and yes even 5 out of 7! Wash your hands, use a note pad and do your electronics work as an “electrical worker”. Now with all that said make sure the “mechanic” in you plugged everything properly and give the harness a good old fashioned wiggle test just in case.

K-WASHED DOWN- If the fuel system is supplying too much fuel and creating a rich condition it will often times drop the compression. It may drop the compression to a value below an acceptable range. Consistent cranking on a washed down engine will cause excessive wear due to the poor lubricating qualities of gas.

L-REALITY- I have owned and driven cars for years that were so cantankerous to break in I felt like torching them and walking away. Many times after a few days of work I had a very stable vehicle. Some of these cars ran like crud for 1200 miles/40 hours and then settled down, ran great and provided many years and 80K miles of enjoyment.

Not a week goes by where I don’t have someone say” I have a rotary car with a new engine in it that nobody can get running”.

M- CRANKING SPEED- Mazda has always known that a weak area of their rotary product is start up. In the 1969-70 R-100 the cars were extremely hard to start right off the show room floor. These and the 1970-1973 RX2 and RX3s had a starter the size of one third of the engine. They weighed in at 30 pounds, had a gear reduction and sat on top of the motor for easy access. The 2004 RX8 underwent a upgraded starter shortly after bring introduced. They went from a unit that spun at 180 rpm to a unit that would turn the engine at 220-250 depending on battery. If you are experiencing a hard start look closely at your starter options- for the amount of teeth and KW power have changed throughout all the models for all years.

N- CONCLUSION- Thru out rotary car production, Rotary Engines have been plagued with no public education, constant design changes in production and a hyper sensitivity to ignition and fuel variances. The goal of this installation pamphlet was to help inform you of  a few of the many variables which can and often do discourage a rotary owner.

O- TRAINING – Due to a lack of rotary technicians and my 30 years of experience Kurt Robertson Enterprises has embarked on a training program offered annually in June called the Wankel Workshop.

This is not just an event or drive in, but much more. It includes a 8- hour formal training class , a 8-hour hands on training and product updates. Offered in order to preserve and educated the future use of these very unique designs, enrollment is limited.

Contact us on the web or phone Roberta Robertson at 503-349-9194 for more information on this training.

Who is behind the best mechanic service in town?